Everyone wants to create the perfect pitch deck. Some people succeed. Others fail. A few scam the world after they convince them with an event pitch deck. That’s the case with the Fyre festival pitch deck. We’re going to analyze what’s good and bad about it.

Then we’ll create the perfect structure of an event pitch deck.

First up, it’s around 42 slides. So it’s quite lengthy. However, there are a lot of fillers in between. Here’s the full deck in PDF before looking at the slides.

Now I’ll give you a chance to explore it before our analysis.

Additionally, if you’d like to watch the analysis instead of reading it, Albusi’s founder created a video accordingly.

The story of the Fyre festival is one that involves scamming investors of around $26 million.

The founder got a six years sentence in jail after he pleaded guilty to defrauding investors. He was recently released.

If you want to know the exact story of the Fyre festival, I can not stress how much you have to watch the Netflix documentary. It tells the story better than a million articles.

However, the summary is that there was hype and an under-delivery. If we‘re to put it as a metaphor, it won‘t be like a burger you see in an ad and compare it to real life. That‘s simply not enough.

It‘s as if I told you to expect warm weather today; then I shipped you off to Antarctica (Meh, not the best metaphor, but it‘ll do. I have to throw unorthodox metaphors not to be considered an A.I. article. Damn you, ChatGPT.)

The start is an introduction to allow the reader to get a feel of the Fyre brand. As with many pitch decks, a confidentiality slide is put in order to ensure that the deck wouldn‘t spread easily (ironic.)

The elevator pitch is in slide 4 to start informing the reader of the fact the Fyre is not just a festival. It‘s a concept.

After an introduction, it‘s now time to show that Fyre solves an actual problem that exists. That‘s the only way investors would deem it worth an investment.

Hence, they‘re focusing on the problem of the fact that recording music revenue is under pressure. The vision is much larger than just a festival, as you might know by now. They aimed to compete with big names like Spotify.

Their solution was Fyre, a global entertainment marketplace. Then they started showing that they have all the pieces of the puzzle, like talent. To ensure that they‘re thinking big, they started showcasing quite big names like Lil Wayne and Queen Latifa.

By then, the reader should be impressed that they were able to secure those people (Supposedly.)

Then they‘re explaining their business model, taking a 10% commission from buyers, and nothing from talent, making it quite lucrative for talent to join in.

These are mainly fillers, and their vision stated.

This is what their traction is, i.e. the upcoming event. They boasted about their lineup in 5 slides. They also mentioned some credibility elements like press statements. Finally, they put a slide for “Land Ownership“, which aims to inform those investors that they are not just “party people” and have more of a business mindset.

Finally, as with any pitch deck, they‘re eventually stating their financials along with how much they‘re raising. Following up on that, they pitched their team members and advisory board.

Somehow, most companies that result in a nationwide scam, like FTX and the Fyre Festival, always had a lot of credibility in their pitch deck.

To end the deck, they put some pictures from their famous photoshoot on the island (seriously, watch the documentary.)

It‘s not just an event pitch deck. It says there is more than just an event coming up, we have a big vision of what‘s coming up. However, it also says that the festival is going to be a lifetime experience, which in a sense it was, but in a negative way.

That‘s the Fyre pitch deck. I advise you to learn from it what they did right—convincing investors. Obviously, you need to learn as well to not overpromise and underdeliver. That being said, let‘s create our own perfect event pitch deck structure.

The perfect event pitch deck has a structure that tells the event’s story. If there is a wider vision, it needs to be pitched. Credibility is of the essence when it comes to an event pitch deck.

Here‘s the thing. Many people expect an event to be profitable but not scalable. You‘re eventually limited by the number of people you can serve per second. For that, you need to convince investors that it‘s not only about the event, similar to how Fyre did it (but you can do it right.)

Of course, that does not have to be the case. You could be just interested in a single event, and in that case, it should be a more simplified deck that convinces people of why to invest or join your event.

An event pitch deck is like a movie trailer. You need to start by capturing the attention. If you don‘t, you‘ve lost your viewer. Similarly, you need to captivate and tease about how good the event will be. That‘s it for the first phase. You do not need to overthink it.

Now that you grasped their attention. You need to start stating why your event is the best. Pitch as many details as you need. Write more about the venue, date, duration, expected attendees, content, and how it‘s different.

Finally, you need to prove that you can do what you‘re saying. For that, showcase your team, partners, online articles, and any other information that says, “We can be trusted.“

What do you want from this deck? Do you want a partner? An investor?

The ending has to be saying it as simply as possible. So that the reader would not get confused and remember this when they go home.

There is absolutely no specific length to aim for in an event pitch deck. As a rule of thumb, try to make it as short as possible. But do not forget to pitch all the above elements.

You‘ve got this. Shoot me a comment if you have a question about how to ace a certain aspect of such a deck, and I‘d love to respond!

Finally, if you‘re interested, I select a few entrepreneurs on monthly basis to help them create their pitch decks. If you’re interested in collaborating, shoot me an email. Here is a similar pitch deck with the pricing and timeframe to an event pitch deck.

The Freelancer Behind This Service

I’m Anil, an Albusi business consultant. I’ve worked with Albusi for quite a while! Check out my profile and full works for more.

You can easily contact me through my email for any questions: anil@albusi.com Pitch Deck PDF Examples: A Pre-Seed Deck I Made For A Client. 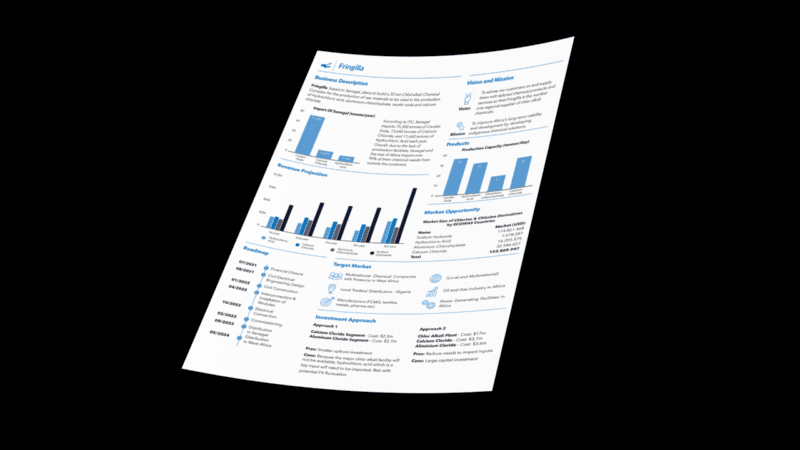